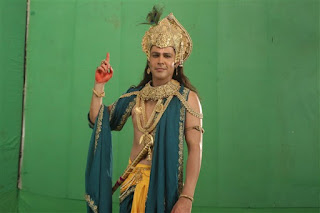 &TV’s Paramavatar Shri Krishna took its audience into the heavenly abode of Krishna’s life. Narrating various fascinating chronicles of Natkhat Kanha and giving the viewers a visual glimpse of his mischievous acts, the show has thoroughly entertained and enthralled its viewers over the last 2 years. Delving deep into the life of Radha and Krishna, the show is set to take an 18 year leap where popular actor Ssudeep Sahir will be seen essaying the role of an elder Kanha. While Ssudeep is set to add an essence of his own to Krishna and Radha’s romantic tales, the ever so loved younger Natkhat Kanha Nirnay Samadhiya will continue shooting for the show and will be seen in flashbacks of various episodes. 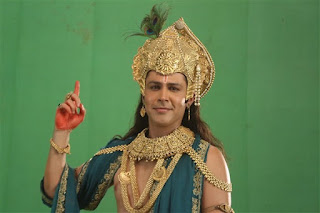 Having worked with distinguished directors and producers in the industry, Ssudeep who has majorly essayed the role of an ideal husband, will now be breaking this image with his mythology debut in Paramavatar Shri Krishna. Experimental in his choices, Ssudeep is ready to take on the new role and do full justice to the character.

Excited about the new opportunity, Ssudeep shared, “Television has picked up pace on several genres, while there are few who lost the trend, there are other genres who have continued being true entertainers. I believe mythology is one such genre that never loses its magic. I am done being a ‘seedha-sadha’ pati on television and felt this stereotyped image restricting me. It was the right time to take up something new and exciting and &TV’s Paramavatar Shri Krishna came at the right time. Mythology has been on my mind since a while and what better way to mark my beginning than with a role on Krishna. Having said that,  the role does bring in with it a couple of challenges in terms of language or enactment which is as much as a first for me. While the struggle is immense, the excitement is blissful and I just hope the change is loved by all.”

Talking about taking inspiration from his idol, Ssudeep said, “My inspiration to essay this role came from Nitish Bhardwaj who has fabulously portrayed the role of Lord Krishna on television. I have grown up watching him play the role and it’s a true honour to portray the same role as his in this show. Just like him, I too wish to be recalled as the actor who played Lord Krishna on television. Provided the chance,  I would like to take a few tips from him on the role.”

The fascinating tales of Kanha and his romantic ‘prem-leela’ with his beloved Radha are soon set to bring a new change and atmosphere in the show.