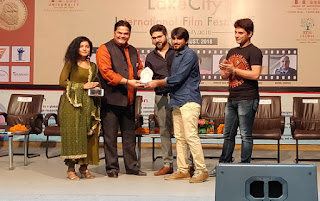 With the new-age of cinema taking over our Bollywood industry, the role played by film festivals is to be thanked for which has helped new and independent filmmakers showcase their talent and upscale the already set limits for Bollywood filmmakers. One such brilliant show-case of storytelling is done by Y-star Cine's 'Rang Biranga Anaar' which has been heaping a lot of praise critically at various film festivals.

Rang Biranga Anaar stars Blockbuster 'Dangal' actor Badrul Islam who has also been a part of hits like 'Tere Bin Laden', 'Khoobsoorat' and many more. ‘Rang Biranga Anaar’ is an emotional drama that talks about the struggle of a family in financial mess where a six-year-old child still believes that he will be able to celebrate Diwali even after bearing the loss of his father at such a small age and the movie ‘Rang Biranga Anaar’ depicts the journey of the young child who sets out to find happiness in the sour situation.

The emotional conduct of the movie drives a special narrative with sheer brilliance, raising the bars for other makers and shedding tears amongst the audience. With the movie getting selection and awarded at various film festivals across the nation the makers would surely be happy that the outcome has lived up to their expectations.
Aditya Bharadwaj, the producer of the short film quoted, "We have been making films based on children and issues surrounding them but this film is very special for us. Festivals and celebrations are important aspects of the life of kids while growing up and not being able to relish it is just heartbreaking. "

After the success and recognition of 'Rang Biranga Anar', Y-star is motivated and set to release more such visual treats at our disposal with '10 Ka 4',   Chandaal, Ghubukudu, Do Rupaye Ka Sikka, 9+1 =1 and 'Therapist ' being their upcoming releases.
'10 ka 4' stars Shruti Sharma from 'Kulfi Kumar Bajewala ' in the movie which depicts the importance of school in a young girl's life with an unstable financial background. The short film is directed by Rahul Yadav under the banner of Y-star and is surely expected to melt the hearts of the audience.
'Therapist' is a suspense thriller highlighting the issue of rape and assault on women with a twist of the tale in the surrounding events. It stars TV actress and Diva Ridhi Dogra who is set to give a power packed performance and deliver another delight for the critics and audience.

9+1=1 is the world's first ever film based on the harmful effects of Carbon monoxide gas and depicts the danger caused by it in a vintage schematic manner. 'Do Rupaiye ka Sikka' is directed by Parvez Khan(FTII) and is a new-age form of storytelling. 'Chandaal' is a Survival Thriller in is surely going to make the audience not leave their seat. 'Ghubukudu' on the other hand is an Ooriya film(Orrisa Regional) with unconventional and break free filmmaking storytelling.
The Director-Producer Duo of Rang Biranga Anaar are gearing up for a feature film now and the Preparation for it has begun as per the Production house.