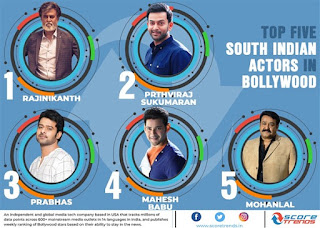 Rajnikanth had three extravagant  releases in 2018-2019 , Kaala, 2.0 and Petta which did huge business at the box-office giving him an annual total of 5447 acquiring 100 points in totality (website,  E paper and Viral news).

These statistics are authenticated and researched by the US-based media tech Score Trends India.

The Malyalam Industry’s superstar Prithviraj Sukumaran is not far behind and ranks second  with the total of 4223 with 77.53 points on the ST chart.

Bhahubali fame Prabhas is strong on third rank with total of  3829  and 70.30 points with his next Saaho he is already a talk of town with pre buzz on websites, social platforms and Viral news.

Another phenomena, Mahesh Babu who’s latest outing Maharishi has sailed past the worldwide theatrical revenue of his previous best outing, Bharat Ane Nenu (2018) to become the top-grossing film of his career with global ticket sales of the film are estimated to be a whopping Rs 168 crore.  Mahesh stands at fourth rank with the total of 3489  and 64.05 points and is likely to grow in ranks within a few weeks.

Meanwhile another Malyalam big wig Mohanlal stands at rank fifth with his latest outing Lucifer and Odiyan released in 2018 already faired good  at the box office. Mohanlal garnered a total of 3294 with 60.47 points.

Ashwani Kaul, co-founder of Score Trends reveals, “Both Prabhas and Mahesh Babu have a huge fan following and are popular on social platforms, Newspaper and Viral News ranking.

With Maharishi breaking records for Mahesh Babu and Prabhas Saaho releasing soon the two have the huge potential of leading the charts and give the Thaliva Rajnikanth a tough contest”.

Kaul further elaborated ,“We collect data from over 600 news sources across 14 languages in India to analyse the media. These include Facebook, Twitter, print publications, viral news on social media, broadcast and digital platforms".

"Various sophisticated algorithms then help us to process this massive amount of data and arrive at the scores and rankings of celebrities,” conclude Kaul.
Reactions: