Bidita Bag to play a glamorous character in her next

on June 02, 2019
Bidita Bag to play a glamorous character in her next 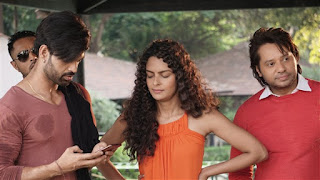 Bidita who was recently seen in Zee5's original "The Sholay Girl" which was based on the real-life story of the first stuntwoman, Reshma Pathan is all set to join the popular franchise "Dunno Y Na Jaane Kyu". The actress will be seen in a bold and glamorous avatar which will surely be a treat as we have always seen her in a traditional yet bold avatar.

"Dunno Y Na Jaane Ko" is the only successful LGBTQ franchise in India which is written & directed by Kapil Kaustubh Sharma. When contacted  Kapil about Bidita's character he said, " When we decided to have Bidita on board we knew she was the right choice for the character, she has worked on one of my projects  in the past and I have seen her act, she brings the character to life."
"Dunno Y Na Jaane Kyu " part 1& 2 has been a successful franchise and still continues to gain appreciation internationally. Part 2 of the movie was shot completely in Norway by international directors and the fans can't wait for the third part of the franchise to be out.

"I keep getting messages and emails from people asking me about the 3rd part of the DYNJK series, I am happy that our story is mattered so much to people and this has only been our driving force towards bringing such stories to light. The third edition to has the same lead character but with a different story, I hope people accept this story in the same way they accepted the first two," explained Kapil Sharma who also plays one of the leads in this successful franchise along with Yuvraj Parashar.

The third edition is currently in its shooting phase and there are some very interesting names too who have joined the cast. The movie is expected to hit the theatres by August 2019.
Reactions: