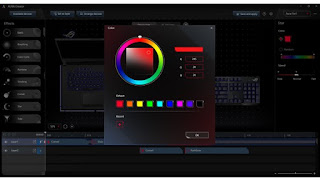 New Delhi, India, May 27, 2019 — ASUS Republic of Gamers (ROG) today announced Aura Creator, RGB-effect-editing software that enables users to create and customize brand-new lighting effects. Its streamlined user interface was designed to be easy to learn for beginners, while offering a multi-layered and expansive level of control for more experienced creators and modders.
Aura Creator is the latest evolution of Aura RGB, realizing a long-held ROG goal of giving PC enthusiasts greater power to personalize and perfect their gaming experience. With this new software, users have the freedom to build lighting effects tailored precisely to their tastes, from harmonizing simple colors across their battlestation to constructing multi-layered RGB masterpieces from scratch. 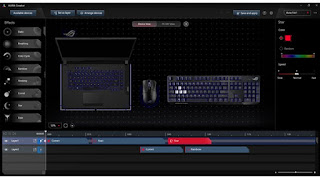 Seeing RGB in a new light
RGB lighting started as a simple suite of cosmetic customizations, enabling players to change colors and effects for select PC components. ROG pushed for more, incorporating reactive functionality like linking lighting to music and CPU temperatures. Aura Sync expanded those options across compatible internal components and external peripherals from ASUS and partners, allowing for effect synchronization across entire systems.
Further development led to Aura Ready, which unlocked system lighting for developers for use in their software. The Aura SDK has spurred on additional collaboration with major publishers, enhancing immersion in games like Call of Duty®: Black Ops 4, Anthem®, Pathfinder®: Kingmaker™, and Tropico® 6 by changing system lighting based on specific in-game events.
Now, Aura Creator allows for deep control of lighting from the ground-up, giving modders, gamers, and other RGB enthusiasts a clean slate to customize, combine, and conceive of new visual effects. 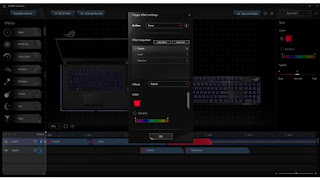 Create an RGB masterpiece
The Aura Creator user interface takes inspiration from popular video-editing software designs. The primary workspace displays a visualization of the user’s gaming setup, located above a timeline where effects are layered and modified.
Aura Creator automatically detects compatible devices and displays them within the workspace. For custom PC and desktop builds, Aura components are arranged in 2D form for easier editing. With laptop setups, users can drag and drop to rearrange devices and match their spatial position with their real-world positioning. From there, creators can simply click and drag to select the part of their rig they’d like to customize. Set the selected area as a layer, and it appears in the effect timeline below.
Each layer offers an impressive degree of customization. Multiple effects can be added to a single layer, and the duration of each one can be lengthened or shortened along the timeline. Stacking multiple layers on top of each other adds depth and complexity, allowing users to place reactive effects over static effects, or any number of combinations therein. 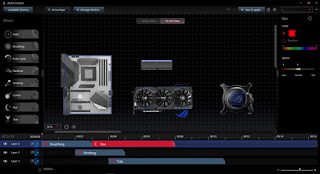 Preloaded effects such as breathing and wave can be modified further within contextual menus. Wave effects, for example, can be adjusted by direction, gradient, speed, and spin. Each effect has its own customization settings, which radically increases the possibilities of what can be created.
A wide selection of keyboard shortcuts, familiar from popular photo- and video-editing programs, speeds up work within Aura Creator. The key combos allow users to quickly duplicate layers, add effects, and more. Users can create lighting displays up to 6 minutes long, which simplifies the UI and ensures minimal load on the CPU. Once the unique effect is finished, it can be saved as a profile within the editor.

###
About ROG
Republic of Gamers (ROG) is an ASUS sub-brand dedicated to creating the world’s best gaming hardware and software. Formed in 2006, ROG offers a complete line of innovative products known for performance and quality, including motherboards, graphics cards, laptops, desktops, monitors, audio equipment, routers and peripherals. ROG participates in and sponsors major international gaming events. ROG gear has been used to set hundreds of overclocking records and it continues to be the preferred choice of gamers and enthusiasts around the world. Learn more about the choice of champions at http://rog.asus.com.