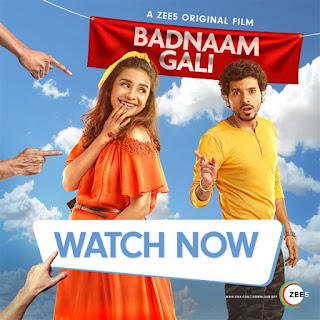 Mumbai, 10th May 2019: : ZEE5, India’s fastest growing OTT platform premieres Badnaam Gali, a heart-warming film which pays homage to the endless love, hustle, sacrifice and tenacity of motherhood.  The film effortlessly questions ‘judging’ and leaves you with a notion of #JudgeKarnaManaHai in a light but effective way. Starring Patralekha and Divyenndu, the latest ZEE5 Original film is both an emotional and fun filled rollercoaster.

Directed by filmmaker Ashwin Shetty, Badnaam Gali is a ZEE5 Original Film which deals with the subject of surrogacy and the taboo attached to it. It is beautifully layered with emotions and encompasses the journey of a surrogate mother played by Patralekha and her dynamic relationship with people around her.

Sharing her experience, Patralekha said, “The pivot of the film is surrogacy, but it is a light-hearted, breezy film. I essay the role of Noyonika and I relate to her as she is not affected by what people think or talk about her. Badnaam Gali is a special film which releases as a lead up to Mother’s Day and audiences will definitely enjoy watching it. I am excited about the release of the film on a digital platform like ZEE5 as it has the potential to reach viewers far and wide.”

Sharing his experience, Divyenndu said, “I had a fantastic time shooting for Badnaam Gali and it is the first time where I got a chance to play the role of a Punjabi boy, Randeep. I am an avid fan of cricket so I instantly benchmarked Yuvraj Singh as a reference point for this role. I watched some of his interviews to catch his Hindi-Punjabi diction, choice of words and mannerisms. All aspects of putting this film together were exciting and I absolutely cannot wait for the audience to watch it on ZEE5 and share their feedback.”

Aparna Acharekar, Programming Head, ZEE5 India said, “At ZEE5, our endeavour is to present a holistic library of content where everyone can find something interesting to watch. Badnaam Gali, a completely fresh take on motherhood. The launch has been timed perfectly around Mother’s Day and can definitely be enjoyed by the entire family and leaves them with the message of #JudgeKarnaManaHai.”

With over 3500 films, 500+ TV shows, 4000+ music videos, 35+ theatre plays and 90+ LIVE TV Channels across 12 languages, ZEE5 truly presents a blend of unrivalled content offering for its viewers across the nation and worldwide. With ZEE5, the global content of Zindagi as a brand, which was widely appreciated across the country, has also been brought back for its loyal viewers.

Zee Entertainment Enterprises Ltd. (ZEE) is a worldwide media brand offering entertainment content to diverse audiences. With a presence in over 173 countries and a reach of more than 1.4 billion people around the globe, ZEEL is among the largest global content companies across genres, languages, and platforms.

ZEE is present across broadcasting, movies, music, digital, live entertainment and theatre businesses, both within India and overseas. ZEE has more than 250,000 hours of television content and houses the world’s largest Hindi film library with rights to more than 4,200 movie titles across various languages. ZEE has also produced several movies for theatrical release and is the fastest growing music label in India.

More information about ZEE and its businesses is available on www.zeeentertainment.com