on May 26, 2019
The significance of, ‘Gud Chana’ to come alive in Mere Sai: Shraddha aur Saburi 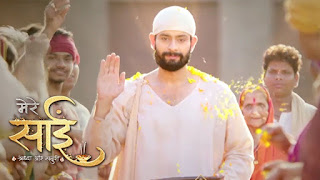 Thursday is considered to be one of the most holy days in the Hindu religion and many devotees visit the temple every week on this day to seek blessings from Sai Baba. Often, we have seen gud-chana being distributed as prasad to the devotees visiting temples on Thursday but only a few know the real reason behind this special prasad. In the ongoing track of the Sony Entertainment Television’s Mere Sai: Shraddha aur Saburi, the significance of the gud chana would come out beautifully on the small screen. As mentioned in Satcharita, Sai gave gud-chana to one of his followers as a blessing and since then, the gud-chana is considered as holy Prasad.

Mere Sai: Shraddha aur Saburi is continuously getting increased followers as the days pass. The show not only gives spectacles of Sai’s story to the viewers but also reveals various untouched facts from Sai’s life. The show based on Sai Baba’s teachings beautifully brings out each story which always has a significant learning and messaging.

In the upcoming track, viewers will see the life story of an honest wage worker, Dattaram unfold on the television screen. Not knowing the tricks of the world, he is unable to pay off the loan on his head which them makes his wife seek help from Sai. One fine day, he finds a potli (Pouch) amongst various paraphernalia on the streets of Shirdi. He decently takes the potli to Sai but Sai asks him to keep it with himself. During the tenure, Dattaram faces severe shortage of money, but is unmoved on his decision to open someone else’s potli. With Sai’s chamatkar, one day it is clearly revealed that the potli contains gold coins. Dattaram getting fretful takes it back to Sai which is where Sai introduces him to Yogendra who happens to be the rightful owner of the potli. The man being a miser gives Dattaram some Gud-Chana when Sai asks him to reward the man for his honesty. Sai asks Dattarm to give his share of gud-chana and being the big hearted man that he is, he agrees but Sai returns his part back to him saying that it is his reward for honesty. Later, Yogendra asks Dattaram what he has and they find out that the gud-chana turned into gold and silver stones.

This was the time in Indian history since where once, gud-chana used to be the symbol of poverty, now represents blessings. Then onwards to today, gud-chana has been used as Prasad in Hindu mythology. When reached out to Abeer Soofi who plays Sai to know his views on the entire story, he says, “Gud-chana holds a very high relevance when it comes to Indian mythology, and has been time-on used as Prasad especially in Sai’s temples. This story of giving gud-chana was unknown even to me before this track took shape. The story of Dattaram and Yogendra is an interesting one and carries a very strong message which means that one should avoid greed and inculcating these values of humility surely make you a better person. Being a part of Mere Sai has been a great experience and I have grown not only as an actor but also as a person as I’m getting to learn so many lessons on a daily basis.

Witness the Gud-chana story of Dattaram in Mere Sai at 6:30 pm, only on Sony Entertainment Television
Reactions: