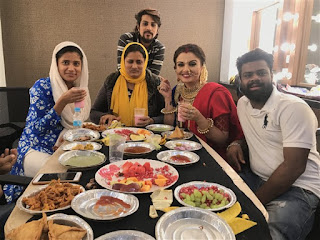 The holy month of Ramzan has begun, it is the time of fasting, praying, sharing and of course the iftar feast (breaking of the fast) that most people look forward to. Indulging in such a scrumptious iftar feast was the cast and crew of &TV’s show Main Bhi Ardhangini. 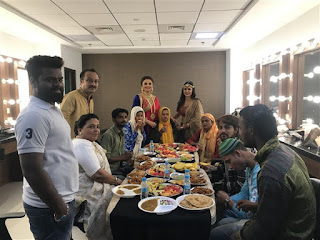 The entire cast and crew of the show has been rigorously shooting in Jaipur since the past few months – Jaipur has become home and the show’s cast and crew, their family. A few crew members are observing the holy fast. Giving them a special surprise during this holy month, and encapsulating the feeling of diversity and brotherhood, the makers of the show decided to host an iftar party and treat the entire cast and crew to a delicious iftar feast.

Shooting away from their dear ones in Jaipur, the entire team celebrated iftar and indulged in some scrumptious delicacies that were called for on the sets. Despite being on a tight shooting schedule, the director decided to call it a wrap early and ensured that the entire cast and crew got some time off to celebrate iftar with good food, great cheer and even better company! The feast consisted some of the most delicious Indian food delicacies like Samosas and Chole Puri along with some traditional iftar food like chicken and mutton kebabs and decadent Nihari Biryani. Celebrating the seasons of mangoes, the team also indulged in a plate of fresh juicy mangoes along with other fresh fruits. And finally, small pots of delectable phirini were devoured that lent a perfect end to the lavish iftar meal. The cast and crew happily gorged on the meal, and the celebrations went on for a while.

Talking about the surprise and the mouth-watering meal, actress Deepshikha Nagpal aka Nilambari said, “Although I am not a Muslim and don’t fast, I absolutely love this ritual and how each member eats together. We are actually considering doing this on a regular basis, especially for all the members who keep a fast during the day. I feel really connected with my team and in fact now look forward to celebrating Eid with them which otherwise has always been celebrated with my dear friend, Ayub Khan.  Being away from home we tend to miss all these special occasions and festivities. This was an extremely sweet gesture by the makers of Main Bhi Ardhangini to bring in the festivities and what better way to celebrate than to share a good meal with your team that you work with on a daily basis. Although I am vegetarian I thoroughly enjoyed the meal and relished the food like there was no tomorrow (laughs). It was indeed very thoughtful of the team to host this meal for us.”

Food and festivals surely bring everyone together.

To know more watch Main Bhi Ardhangini every Monday -Friday at 9:30PM only on &TV