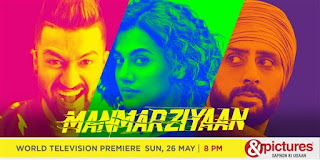 A love story that is unlike any other, Manmarziyaan is a romantic comedy-drama that revolves around a love triangle starring Vicky Kaushal as Vicky, Taapsee Pannu as Rumi and Abhishek Bachchan as Robbie. Directed by Anurag Kashyap, the movie presents a classic love triangle, told with a fresh perspective where the characters are constantly oscillating between confusion and complex emotions. &pictures, Naye India Ka Blockbuster Movie Channel, will air the World Television Premiere of ‘Manmarziyaan’ on Sunday, 26th May at 8 pm.

Vicky Kaushal who plays Vicky Sandhu said, “Manmarziyaan is been one of the most liberating experiences for me as an actor. I believe the character Vicky Sandhu to be my alter ego and to completely surrender to that character and to the world of Anurag Kashyap was one of the most learning experiences for me. It was the first time I was collaborating with Tapsee and Abhishek and had a blast shooting with them. I really hope the fans watch the World Television Premiere of Manmarziyaan on &pictures as much as we enjoyed making the film.”

Essaying the role of Rumi, Taapsee Pannu said “When Kanika was narrating the script to me, I felt there was no challenge in portraying the character of Rumi. I’m a black or white person in real life, but this character is confused and indecisive. So, I couldn’t relate to her. Then, she said something which was the reason I took up the film. She told me, ‘Had it not been for that patch, it would have been a cakewalk for you.’ That became the selling point for me.”

Commenting on his character - Robbie, Abhishek Bachchan said, “I feel every actor brings a lot of himself or herself to a character and, also takes a lot back. There are several shades of me in Robbie and there are things about Robbie that I would love to emulate.”

Set-in small-town Amritsar, the plotline follows the life of Rumi (Taapsee Pannu), an unapologetic girl who is crazy in love with Vicky (Vicky Kaushal) who is a typical Punjabi munda. When they’re caught red handed by Rumi’s family, she is pressurized to get married. But Vicky however develops cold feet and keeps avoiding Rumi's request to bring his parents over and ask her hand in marriage. Eventually, she gives up on him and agrees to an arranged marriage. That's when Robbie (Abhishek Bachchan) enters the proverbial love triangle. They begin spending time together and end up getting married. Things however take a turn when Robbie finds out that Rumi cheats on him with Vicky. Will Rumi leave Robbie for Vicky?

Elevating and capturing the emotions of the film, are the songs by Amit Trivedi. Manmarziyaan’s 14-song music album is rooted in Punjabi music with Dhyaanchand, Halla, Daryaa and Sacchi Mohabbat being the highlights of the film.

Ahead of the World Television Premiere, the channel has planned a 360-degree marketing campaign to drive the core messaging of ‘Pyaar Full of Passion, Dil full of Confusion’. To amplify the messaging while extending the insight of dilemmas that the youth faces when it comes to the matters of the heart, &pictures has associated with Café Coffee Day and major cinema chains in Mumbai, Delhi, NCR regions, Bhopal, Indore, Kanpur, Nagpur, etc. for contextual branding.

Watch the World Television Premiere of Manmarziyaan on &pictures Sunday, 26th May at 8pm
Reactions: