on May 22, 2019
COLORS INFINITY celebrates ‘A Decade of Dreams’ with Season 10 of Shark Tank 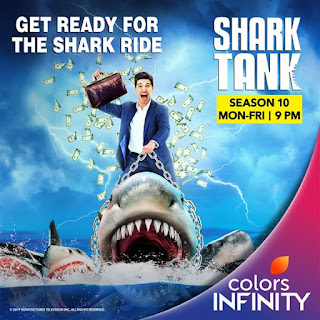 ~ Premiering the 200th episode, Season 10 of the critically acclaimed and multi-Emmy award winning reality show airs every weekday at 9pm on COLORS INFINITY, starting tonight ~
~ Sharks Kevin O’Leary, Mark Cuban, Barbara Corcoran, Lori Greiner & Daymond John return to the tank along with a long list of guest Sharks including Sara Blakely, Bethenny Frankel, Rohan Oza, Alex Rodriguez, Charles Barkley, Matt Higgins, Jaime Siminoff & Alli Webb ~
National, Monday May 20, 2019: Reinvigorating the spirit of entrepreneurship, the critically acclaimed and multi-Emmy® Award-winning reality show returns on Indian television with its latest season. Starting tonight, catch the tough, self-made, multi-millionaire & billionaire Sharks as they continue their search to invest in the best businesses & products, giving people from all walks of life the chance to chase their dreams and potentially secure business deals that could make them millionaires. The season 10 premiere, also the show's landmark 200th episode, airs every weekday at 9pm only on COLORS INFINITY.
Commenting on the India premiere of the latest season of the show, Hashim D’Souza – Head of Programming, English Entertainment, Viacom18, said, “Shark Tank is a clutter-breaking business-entertainment reality show with global appeal, and an ever-growing fanbase in India. Acting as a phenomenal platform for startups in search of capital infusion and expertise of the Sharks to transform their incubated ideas into thriving businesses, the show is an inspiration to the youth and aspiring entrepreneurs in the US, as well as the world over. With elaborate pitches on the show both successful in convincing the Sharks to invest and also those that fail, continue to act as case-studies for business school students, Shark Tank sets a niche example in edutainment. Owing to this unique appeal, for 9 seasons running, Shark Tank is one of the highest rated & most-watched shows on COLORS INFINITY and in its tenth season the show will only soar further in entertaining and motivating viewers across milieu and age-groups.”
The biggest business-themed show on television – Shark Tank has become a culture-defining series and an inspiration to budding entrepreneurs. Invested in countless opportunities over 10 glorious years, Shark Tank celebrates ‘A Decade of Dreams’ with money-instinctive Sharks playing overlapping roles as investors and mentors to the entrepreneurs pitching their business ideas on the show.
Joining the seasoned Sharks in the Tank for season 10 is a list of guest Sharks including Sara Blakely, Bethenny Frankel, Rohan Oza, Alex Rodriguez, Charles Barkley, Matt Higgins, Alli Webb and former participant from season 5 – Jaime Siminoff, whose business was acquired by Amazon for more than $1 billion.
Watch the killer Sharks smell money and invest in booming business prospects on Shark Tank – Season 10, starting tonight every weekday at 9pm, only on COLORS INFINITY

ABOUT COLORS INFINITY:
COLORS INFINITY is Viacom18’s English General Entertainment Channel, under the flagship brand COLORS. Bringing a new horizon to English Entertainment in India, COLORS INFINITY will showcase internationally acclaimed television series spanning genres such as Drama, Superheroes, Comedy, Fantasy, Crime and Thrillers from major studios like Warner Brothers International TV, NBC Universal, Sony Pictures Television, Twentieth Century Fox, Lionsgate, MGM, BBC and Endemol Shine amongst others, and reality shows ranging from Dancing, Cooking, Magic, Singing & other lifestyle interests. The channel is also the host for the biggest global Live Events & Award shows, as well as premium biopics, mini-series Documentaries and much more. COLORS INFINITY aims to appeal to the neo-urban viewer and open-up a wider market by breaking the English language barrier. The channel is Available across DTH & Digital cable platforms, the channel will be aired in SD as well as 1080p HD format with Dolby 5.1 Surround Sound.

ABOUT VIACOM18:
Viacom18 Media Pvt. Ltd. is one of India's fastest growing entertainment networks and a house of iconic brands that offers multi-platform, multi-generational and multicultural brand experiences. A joint venture of TV18, which owns 51%, and Viacom Inc., with a 49% stake, Viacom18 defines entertainment in India by touching the lives of people through its properties on air, online, on ground, in shop and through cinema.
Reactions: