on January 19, 2019
Total Dhamaal’ new poster: Ajay Devgn, Madhuri Dixit, Anil Kapoor and others are set on a never-ending adventure

‘Total Dhamaal’ is the third instalment of the ‘Dhamaal’ franchise and this time the Indra Kumar directorial seems like it is going to be triple the fun and adventure. The makers unveiled the first look poster yesterday and now they have released a new poster of the film. 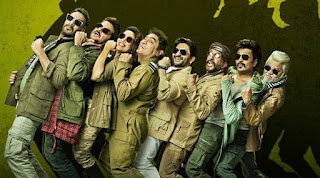 The new poster has all the actors along with some glimpses of scenes from the film in the background. One can see a plane which has apparently caught fire in the backdrop along with some wild animals like Lion, Tiger, Elephant and Gorilla on sides and also two of the characters landing through a parachute.
Taking to his Twitter handle, Ajay Devgn shared the poster and captioned it as, ‘Never-Ending Adventure & Fun Starts In 2 Days! #TotalDhamaal Trailer Out On 21st Jan.
Reactions: