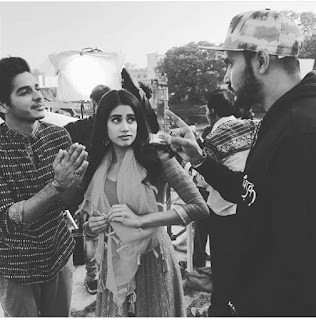 Janhvi Kapoor's debut, Dhadak, that features Beyond the Clouds debutant Ishaan Khatter as the male lead, kicks off today in Udaipur .Director Shashank Khaitan, who has previously helmed Badrinath Ki Dulhania, had been prepping for his next for a better part of the year and is confident of his leads. To be shot across Rajasthan, the film is a Hindi remake of Nagraj Manjule's Marathi hit, Sairat, which had featured Akash Thosar and Rinku Rajguru as leads.

The shooting of the film will be  wrapped up as soon as possible and that his city-bred leads have been working for months on their dialect and dancing skills to get into the skin of their characters says  Shashank. "It won't be a long shoot; we are wrapping up by March for a July release next year, but the prep for the film had started in May. When you take up the responsibility to adapt a film like Sairat by putting it in a different region, you want to be well-prepared and not be complacent about prep. It is the most crucial part of all my films. We have tried to be as authentic as possible with Janhvi and Ishaan's characters," the filmmaker says.
Reactions: