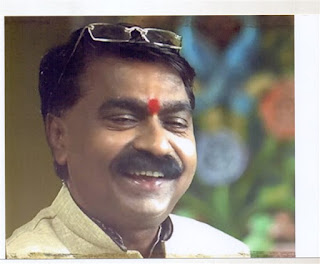 Producer Sadanand Pappu Laad is all set for releasing as many as 12 films simultaneously from his own banner which will be a world record as no single producer has so far achieved this feat eversince the commercialisation of Cinema has begun all over the world which is watched by crores of people in the cinema halls.
On December 11th at the Laadacha Ganpati Temple wherein the mahurat shots of his two films viz. SAHELIYAAN...NAUGHTY GIRLS, being directed by Vicky Ranawat and SSHH....TOH AALAY being directed by Balasaheb Gore were being taken, the hugely excited producer Sadanand Pappu Laad was in his elements and told Journalist and PRO Mohan Ayyer:    " I am going to release twelve films, all new , on 24th February 2017 and also 26th February happens to be my birthday. I am introducing many new talents to the film industry and will continue to do so even in my forthcoming films which I am already shooting in Pune, Nasik locales and even in Mumbai. The films are already completed and are in the various stages of post-production like dubbing, sound mixing, final mixing of sound-tracks, Digital intermediate( D.I. ) etc.  and awaits censorship shortly while the publicity will be held in full swing during the mid-week of February 2017.

Sadanand Pappu Laad is doing a yeoman service by introducing fresh talents to the film industry which is now heading for a New Bharat, New India, New Hindustaan  under the leadership of our dynamic PM Shri Narendra Modi and Sadanand Pappu Laad says : "I Am Only Doing My Bit To The Society where Cinema Is Now Getting a Big respect from the families too and will continue to introduce new talents in all the departments of cinema in the future too."
Reactions: