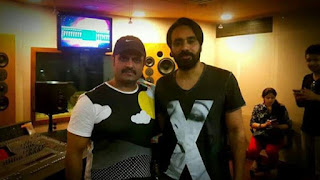 Monsoon, in the album will spell magic, romance, intensity, drama or poetry. The incredible variety of emotions makes the album one of the most breathtaking albums of the year.

The album is filled with so much positivity that it instantly dispels the gloominess of a bleak, rainy day. The sublimely beautiful song, combined with beauty about moonsoon, provides the perfect backdrop for the singer and the music director to weave their magic. The song will help you explore this enchanting world of thoughts and emotions

The song is touted to go down the history, in terms of choreography, singing, music and acting—and a trendsetter of sorts for the many other songs that equate rain with rendezvous?

DJ Sheizwood says "The track will convey a beautiful story. Rain songs usual capture the essence of passion which has been a favorite of people. Though music is a very personal choice, we are sure the love for rains songs is universal"

Babbu Maan says " Serene, Sublime & Majestic is synonyms with the album. The album is not just a video; it's an experience, which will be seen and cherished by most"