Mumbai.Super star Akshay Kumar, who said he had met the legendary wrestler cum actor for the first time when he was a child and showed a picture of the meeting even remembering the shirt he wore, released a book written by Seema Sonik Alimchand on the late actor cum politician called ‘Deedara aka Dara Singh’. The book published by Westland was released at Hotel J. W. Marriot, Juhu, Mumbai on Saturday 10th December, 2016.
While releasing the book, Akshay Kumar stated that he had a close relationship with both Dara Singh and his actor son Vindu and Amrik since like Dara Singh, his own father Hari Om Bhatia also was a wrestler and he remembered the good old days when he used to accompany his father to Vallabh Bhai Patel Stadium to watch Dara Singh’s wrestling matches. Akshay recollected that he remembered a myth about Daraji that there was a Trishul on his back and whenever he gets angry, his third eye will open.
On spotting Gurbachan Singh and Mohan Baggad in the audience, Akshay turned emotional and said that Mohan Baggad was the first fight composer with whom he worked in the industry and his first fight scene in the same film was with Gurbachan Singh.
Answering a question whether he would like to be part of a biopic on Dara Singh, Akshay Kumar joked that if Vindu persisted and pushed him he was ready to act in such a huge biopic but it will entail a lot of preparation including working on his body to play the part and he would need a year or two to get into that kind of frame.
Vindu confessed that as a child, he was very weak till he passed out of eighth standard and his father put him to exercise and building his body and before the end of school he was the strongest due to his father Dara Singh,he also praised Akshay for being a doting dad and was sure that Aarav with be a huge superstar due to hard work and training that his father will ensure happens, he also said that writer Mahrukh Mirza (of Mirza Brothers of Love Story fame) has written the subject for a film on Dara Singh and the biopic on the late actor would be launched shortly as the producers are a huge company. Seema Sonik Alimchand, writer of the book ‘Deedara aka Dara Singh’ had  done a lot of research for over two years on Daraji after consulting his wife and the family members of Dara Singh including Vindu Dara Singh.
Present at the venue were Shad Randhawa with his entire family, Mukesh Rishi,Naved and Sayeeda Jafferi, Rohit Verma, Mohan Baggad, Gurbachan Singh, Mohomed,Lucky and Ali Morani ,Mamik, Rajil Sayani, the son of Ameen Sayani, Rattan Aulakh,writer Mahrukh Mirza and others, Vindu Dara Singh's wife Dina and their daughter Amelia , brothers Parduman and Amrik, Daman Maan and friends . 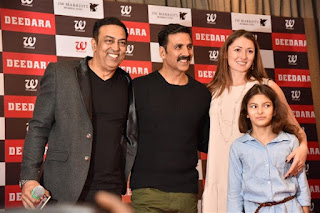 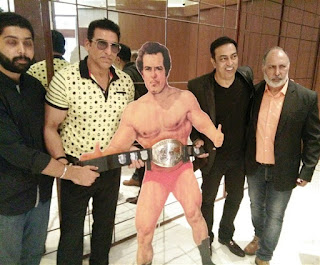 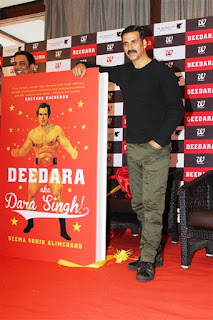 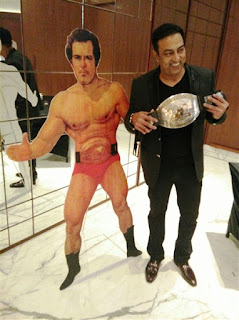 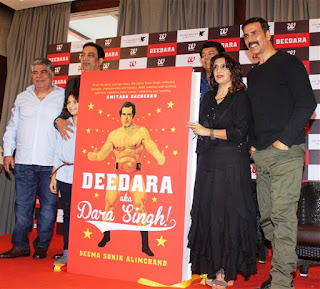 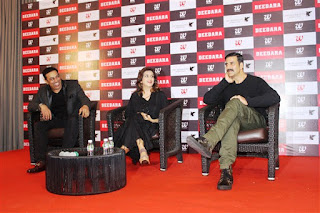